You Want Me To Kick Him Where?!

I looked at the shield and hesitated. “Can’t he raise the shield a little more?” I asked.

“No! It has to be at groin level,” he responded with a grunt.

“Isn’t that cheating?” I questioned once again. I know… I was pushing it… I have a tendency to put my foot in my mouth quite often, and I knew I had it coming when he gave me a sour look. 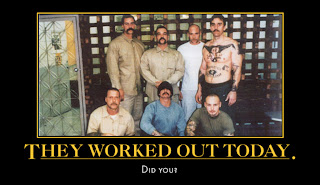 He drew in a deep breath. I could tell he was on his last nerve, and I was officially volunteering to get on it. He leaned in. “Do you think a criminal is interested in scoring for points? You’re small. He thinks you’re weak, and your only defense is to hurt the only thing he’s got between his legs. That’s what’s gonna give you that chance to breathe because he’s got you in his grip.” He drew nearer. I gulped.

“So you have to ask yourself, do you wanna die or do you wanna live? The way you train in here is how you’re going to react out there. So go for the b***s I’m telling you?!" The vein on his temple seemed to come alive, staring at me fiercely, if it had an eye, I would say it would be giving me the STINK eye.

I braced myself and lowered the height of my kick. I felt uncomfortable and a bit apprehensive. And then they told us we were going to do it without the shield. Although my partner was wearing a cup, I shrank back at the thought of going there. Yikes! Is he for real? I asked in an undertone. Our instructor assured us that the cup was there for a reason, so there was no need to fret. I didn’t want to do it. I scanned the room for the nearest exit sign. Perhaps if I tip toed my way out of there, he wouldn’t notice. No dice! I imagined his temple vein coming to life and tipping him off. The drill started; my partner’s hands gripped tightly around my neck. Something inside me exploded, and I burst with a full blown kick to the crotch. Immediately his hands flew off. Woah! This stuff really works, I thought to myself. But instead, the first words that flew out of my mouth were, “I’m sorry!”

“SORRY?!” Yelled the instructor. I grimaced sheepishly and shrank back, wincing. “There’s no SORRIES in Krav Maga!” he said, throwing his hands up in the air, before gripping the roots of his hair as if ready to tear off his scalp.

And then I realized. This was the real thing. I had found a system that leveled the scales between men and women, and like an addict, I was hooked and wanted to learn more.

Have I always been comfortable with this? I haven't gotten completely used to it, yet, but it makes alot of sense. Krav Maga has clearly shown me time and time again that size isn't always advantageous. Women, in particular, have a tendency to feel defenseless because the assumption is that there is nothing they can do against a perpetrator bigger than them, so what’s the point?  Not the case with Krav Maga, and aside from the tremendous health benefits, I have learned some crucial life-saving skills. It is very possible to survive an attack. I see the instructor ladies at my center do it all the time. I personally know female instructors who have had to spar with men three times their size.

One instructor related her experience when when she went to California to get certified: “I told them…hope you all brought your cups, boys, cause I’m using elbows and going for b***s.” Then she continued, “You’re small, their arms are much longer and your reach is much shorter, so remember what I’m telling you, because when it comes down to it, it’s going to be your best defense,” she advised. 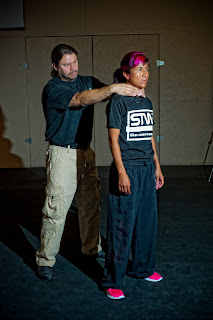 See how a simple technique of learning how to kick to the groin, in this case knee to the groin, can bring down an assailant twice your size. 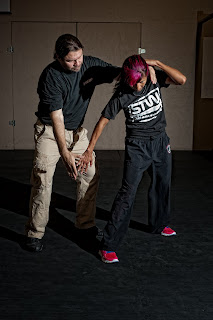 When the choke comes on, the immediate danger is the passageway, so it's important to pluck the assailants hands off. In one fast motion, step to the side and strike the groin as hard and as many times as it takes for the hands to release the choke (see picture demonstration to the right). 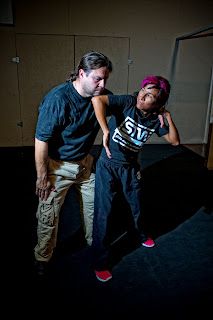 The assailant's immediate response will be to lean forward and a swift, hard elbow to the chin is enough to stun him and to give you the opportunity to follow-up with more combatives. 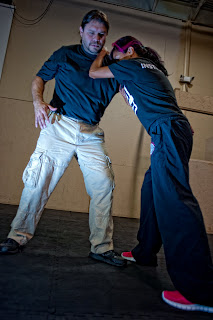 Immediately turn into the assailant and throw a hard knee to the groin area and make your quick escape. 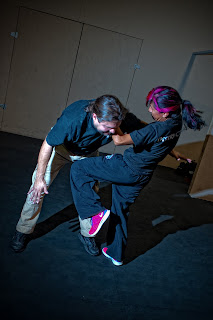 So, points I need to constantly remember when working with people twice my size, which is 99.9% of the time: One, I can’t apologize… and two, it has to be done. I have to go for—well—you know. But maybe I will say I'm sorry to my partners... as long as temple vain is not within ear's distance away. *WINK*