Whatever you do- DO- SOMETHING!

So my instructor goals have been put on hold due to several life setbacks, MEH! Such is life. Sometimes obstacles get in the way from pursuing certain goals, like in my case injuries and such, and we have to simply figure out a way around it without clamming up and throwing in the towel.
I had a foot injury back in December due to inflammation on my feet called plantar fasciitis, something I had since August. My doctor explained that it was constant inflammation on the arch brought about by wearing improper footwear with little to no arch support that caused it. I wore boxing shoes, which I love by the way, but in retrospect perhaps it may not have been a good idea to wear them everywhere I went, because the sole is completely flat. I experienced a lot of swelling throughout the months of August through December but usually shook it off, iced it, felt better and kept going, until the day of the incident, of course.


So how did it happen, you may wonder? I was kicking one of the instructors off a guard position, and by the way, when you look at this kid, you think, “light as a feather,” but one has no idea that this little bugger stings like a friggin’ bee. When I kicked him, it reminded me of the episode from Rocky IV when Ivan Drago just got pummeled by teeny tiny Rocky (http://youtu.be/VeTZzlSE_Mo ) and he tells his trainer, “He’s not human… he’s like a piece of iron!” (http://youtu.be/p671JaPTdbI)- HANDS DOWN, my FAVORITE part of the movie by the way.
Well, that was this kid. I kicked him in the chest and my foot literally went— SNAP! I didn’t hear a CRACKLE and POP, so I dismissed it as probably one of my joints popping—meh—they pop all the time, so one more wasn’t gonna make a difference. Of course, I started limping, but had to suck it up, after all I wasn’t gonna let the little booger get the best of me. HA! Yes, I’m ashamed to say it, but guys aren’t the only ones with egos here. Besides, Chief Instructor Temple Vein kept yelling in his usual and lovely gruff manner, "Are you in, or are your out?!!" And what was I going to say? "Um, no, cause I have an ouchie?!”  Pfff! Puh-leeze! There’s no crying over ouchies in Krav Maga.
So, I finished the training, spent the whole night icing it and participated in the Warrior Dash (see video below) the following day, yes, with a limp. It wasn’t that bad, the mud was quite soothing, actually. Anyway, flash forward to several ice packs, frozen pea bags, a chiropractic adjustment, x-rays, and an MRI a week later, and I found out I had ruptured the medial tendon. No surgery required-phew! But he stuck me in a boot for a whole month, and there went my second time around at making it into the instructor program. Well, in a nutshell, and how can I put this nicely without sounding vulgar, coming across as uncouth and obscene, but that news TOtally-- BLEW!

Oh well, no sense in pining over things you can’t control, so I decided to continue training in whatever form I could and I would have to try again for the THIRD time around some other time. As with many fitness and martial arts practitioners, stopping an exercise routine is not always an option. For me, I had worked so hard to lose the weight I had in the last two-and-a-half years, that I wasn’t about to stop now. If you stop, all that hard work of getting to the level of physicality that you have attained will go down the drain and before you know it, you start spiraling down the opposite direction all over again. STW Krav Instructor, Pete Hardy, says it best, “Do SOMETHING every single day! If you stop, you will find an excuse to stop completely, and one day turns into two, two to a week, a week to a month, and before you know it, you’ve completely stopped what you were doing before.” 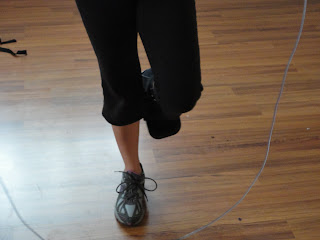 So I determined to do something in any modified way I could. I jumped rope with one foot, did pushups on one leg, lifted weights on a chair, and punched bags on my knees. I learned from this whole experience too. After all, life is a journey and if I don’t take the time to digest life’s lessons, I’ll miss out on the most important part of the ride. I began to see what a disabled veteran with one leg would have to go through. I questioned how I would teach and modify for a wounded warrior in a similar situation, for example. It was a good experience, overall, and although I may not have liked it at the time, I’m sure this knowledge will be useful to me some day. ﻿﻿
It’s been about eight weeks, and I finally got clearance from the Doc to start training again. YAY! I’ve developed some pretty strong arms this whole time—of course they’re not Schwarzenegger arms, but then again, why...would I want… Schwarzenegger… arms? Nonetheless, I feel stronger. Now it’s time for some total body workouts. Becoming a Krav Instructor may seem far-fetched, and if it’s meant to be, it will eventually happen. There’s a reason for this delay, but I’m enjoying part of the ride, and now even more so, because I’ll get to rejoin my brothers and sisters for some long awaited level 3 training. YES! Thank God for doing something every day, even when I didn’t feel like it.